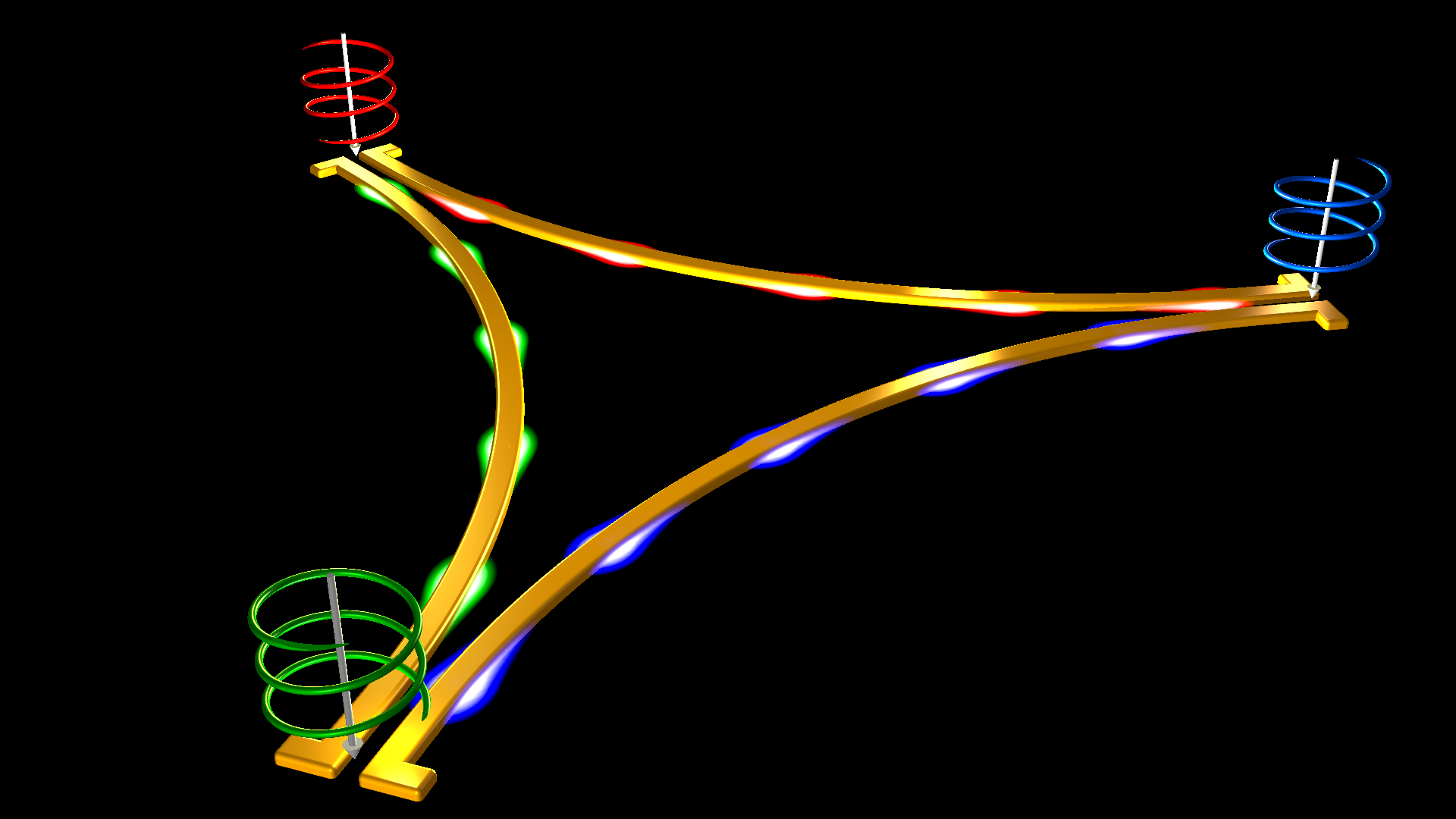 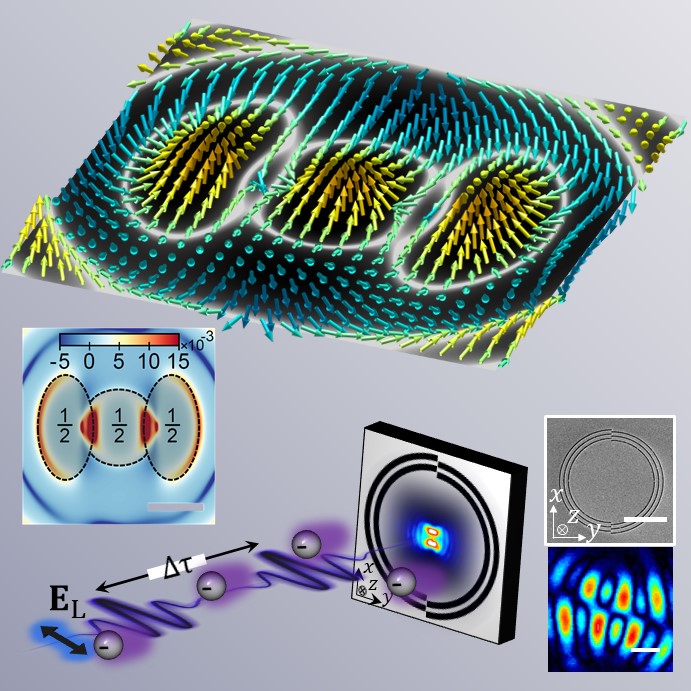 Classically, light as a wave propagates in the k-vector (momentum) direction with transverse electric and magnetic fields oscillating at a frequency ω. The field azimuthal direction and rotation defines its polarization and spin angular momentum (SAMs). Quantum mechanically, it is also a wave packet of photons, each carrying energy ħω (ħ is the Planck’s constant), momentum ħk, and SAM quantum S=±1ħ. Upon illumination to a solid, the electric field interacts with electric charges to generate collective light-matter quasiparticles such as excitons and plasmons, within the Fermi sea. The quasiparticles are defined by the properties of the field, dielectric function of the solid, and geometry of the light-matter interaction. Upon capturing photons, quasiparticles can reemit them, decay into incoherent particles, or excite other degrees-of-freedom on the attosecond to femtosecond time scales. Light interacting with matter can also create electromagnetic topological textures as self-localized wave packets. Tony Skyrme proposed in his seminal work topological quasiparticles to describe the field textures in nucleons. Such concept was further developed and the topological texture quasiparticles are now referred to as skyrmions.

Surface plasmons are evanescent waves generated through the collective oscillations of electrons at a metal/dielectric interface under optical excitation. Surface plasmons are mainly classified into two categories: surface plasmon polaritons (SPPs) that propagate along the metal-dielectric interface; and non-propagating localized surface plasmons (LSP) that are confined to individual metallic nanoparticles. Due to the strong light-electron coupling and near-field nature, surface plasmons offer two enticing traits: (1) the opportunity for sub-wavelength spatial confinement of optical waves is enabled; (2) giant local field enhancement of optical waves is permitted; and (3) extreme sensitivity to the polarization of the exciting optical waves. These unique attributes lead to the long-envisaged optical circuits, and allowed breakthroughs in the generally termed “plasmonics”.

At UPL, we focus on many aspects of plasmonics,  including metasurfaces, plasmonic transmission lines, optical beam steering, particle trapping, light-matter interactions, non-linear optics, and ultrafast plasmonics. We aim to explore these possibilities for practical applications. Our capabilities in plasmonics include numerical calculations, device fabrication, full-vectorial optical arbitrary waveforms generations and optical measurements in both near and far fields.

Current projects related to plasmonics include:

Optical waves carrying angular momenta have attracted immense research attentions in the past decades. Optical angular momenta are classified as either spin angular momentum (SAM) or orbital angular momentum (OAM). SAM is associated with circularly polarized light, where the spin of the photon leads to rotation of the instantaneous electric field vector as the wave propagates. In contrast, lightwave that carries OAM in free-space exhibits a helical phase front and is often referred to as an optical vortex. An optical vortex incorporates an azimuthal spatial phase in the mathematical form of exp[jqφ], where φ is the azimuthal angle in the cylindrical coordinate, and q is the topological charge that determines the number of phase discontinuities (abrupt phase jumps from -π to π) within a 2π range. We demonstrated the control and creation of optical vortex beams both in the near- and far-fields.

Broadband coherent optical sources such as femtosecond lasers and optical supercontinua are essential tools for applications such as spectroscopy, nonlinear microscopy, and frequency metrology. However, since the optical power is simultaneously distributed over a broad optical bandwidth, these sources often suffer from low spectral power density (spectral brightness). Such characteristic could hinder the signal to noise ratio and thus reduces the data acquisition rate in the aforementioned applications. One exciting solution, known as spectral compression, is to redistribute the optical source power from the entire bandwidth into a narrow user-desired spectral window. The spectral compression ratio (SCR) is typically defined by the ratio of the input to the output full-width half-maximum spectral bandwidths. A higher spectral brightness enhancement is enabled through a larger SCR.

We demonstrated the first spectral compression using soliton propagation in a dispersion-increasing fiber (DIF). In a DIF, the dispersion coefficient is gradually increased from the input value Din to the output value Dout during the fiber drawing/coiling process. The working principle is the reverse operation of the well-known soliton temporal compression in a dispersion-decreasing fiber. We further showed the maximum SCR obtainable in a DIF would not be limited by the dispersion ratio of the fiber, i.e., hDIF=Dout/Din. A high SCR of 28.6 using a DIF was obtained. Recently, we set a new record of SCR of  102.8 and demonstrated the ability to shaped the compressed spectra.

Spectral line-by-line pulse shaping, in which discrete frequency components of a mode-locked laser are independently controlled, allows optical arbitrary waveform generation (OAWG). In order to achieve OAWG, spectral line-by-line shaping needs to be applied on an optical frequency comb laser, otherwise absolute frequency instability in the mode-locked laser leads to waveform distortion in the time-domain. Such unique integration of pulse shaping to an optical frequency comb allows generation of waveforms with both controllable ultrafast time structure and long term coherence. However, in typical OAWGs, only a single optical polarization has been utilized. It is well-known that optical fields are vectorial in nature, and plasmonic devices can be designed to be very reactive to the incoming optical polarizations. Therefore, the ability to control the two orthogonally polarized fields for the synthesis of optical waveforms with desired instantaneous field polarization is therefore vital. To this end, the first vectorial optical arbitrary waveform generations (V-OAWG) have been demonstrated in my laboratory.